I’ve said it before: the best of intentions and reality don’t always meet.  I don’t know what made me think 2018 would be much different.  I chose focus words instead of resolutions hoping they would keep me on track for a broader area of life; found two women who were also looking for accountability partners to help with their exercise and fitness routines; joined a friend’s “Biggest Loser”-style fundraiser challenge.  What am I doing right now?  Eating frozen pizza for supper.

I bought a blank planner to use as a training journal. I wrote in swim workouts from a web page someone in a Facebook group recommended.  I had them set up for 3 days a week from 03 January through 02 March.  I wrote them in INK

so I couldn’t erase them.  And you know what?   I skipped the first day (Wednesday) because I was feeling fat, and made excuses about not knowing where all my pool gear was (which wasn’t entirely made up — I really had no clue).  I made no effort to find it either. Day 2 (Friday) I was determined to get to the pool. I got a call from my Dad.  Mum was sick, and would I sit with her in Urgent Care, and she may or may not need to go to hospital.  I pack my “Go Bag” for hospital waiting and leave.  On the way Dad calls again.  Mum is going via ambulance to hospital.  I change directions and head there.  I never got home until 4:30 am Saturday and fall into bed at 5:15.  And Mum?  She has Influenza A. Yes, she got this year’s vaccine.  I did not. (Insert prolonged internal sigh.)

Saturday morning was supposed to be my running group’s kick off meeting.  I left a message on their Facebook page with my regrets, explaining since I’ve been exposed to Influenza A it’s better I stay home.  A friend who is an elementary school teacher with a toddler and 5 month-old liked that post. I allowed myself to sleep until I woke up.

I wish the story ended there. It doesn’t.

Sometime in the early afternoon I manage to drag myself out of bed, use the loo, and put on my Saturday uniform: tee, hoodie, baggy sweatpants.  Oh, hey!  Something on my side showed up that shouldn’t be there, a small patch of bright reddish-pink rash.  Contorting myself to get a picture, I snap one so I could get a better look. (Insert “Oh bother!” and a sigh.) I post the picture to a trusted (and private) Facebook group, which has zero medical community affiliations, save for a handful of members in the profession. Their collective wisdom agrees with my suspicions. They also share stories of their experiences.  I do not want to be like them.  I tell my hubs about it. He says I shouldn’t jump to conclusions.  I am highly suspicious of this rash though.  In the shower it starts to burn and hurt in the almost too-warm water even though I never even touched it.  (Bigger sigh.)

Dressed, I tell Hubs I think I need to be seen, “rash, burns, hurts, it shouldn’t” “Tonight, or Monday?” “Tonight, I don’t think I should wait.” He is skeptical and knows talking me out of it won’t happen though. It’s after 8pm, the walk in clinic closes at 10. I find a bandage, add some tea tree oil, cover it and head out telling him I will text updates.

Me?  It’s shingles, just as I suspected. (More heaving sighs; add some head shaking on my part) Doctor praises me for coming in so quickly (vindication! no one sees) and sends a prescription for anti-viral meds to the pharmacy, which is open 24 hours. I ask about swimming because I have race plans and need to get started.  NO, absolutely, unequivocally, no public pool contact until the blisters has scabbed and dried. (More Bother! and bigger internal sigh.)  The first dose is in my system within 6-8 hours of first spotting the rash. 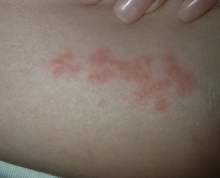 Five days into the new year and my training plans had already been tossed out the window.   I wrote SHINGLES on all the days.  I tried a streamed yoga video that Saturday instead of going for a run.  It wore me out, and I barely got out of bed until Monday.

The next week passed in a blur of fatigue, minimal appetite, weird dreams — one involved Princes William and Harry, whaat?! — and crazy sleep cycles.  I remember, mostly, to take the pills at the 8 hour intervals.  Shhhh, don’t tell, but I missed a whole day.  In my defense I slept for most of it.  My internal clock is broken already, but add full body fatigue and it spun around like the Mad Hatter’s at his tea party.

I had a follow up appointment already scheduled with my Nurse Practitioner for something else.  I asked if she could assess my shingles, and let me know when I could think about swimming again.  After having a look, I am told they are all clear and I can swim whenever I want, and we may run into each other because we swim at the same pool.  She’s there by 7:30am on her day off.  I chuckled, That’s not gonna happen.

Use SSA667Lin to save 15% off full price items. Code can be reused.